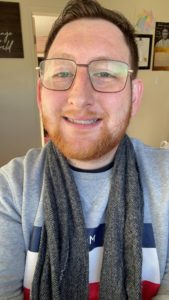 Say hello to NTLP alumnus Adrian Perryman-Liahut! Adrian first heard about NTLP through his cousin, alumnus Zac Hellwig, who attended camp in 2007. In 2008, Zac invited Adrian to come with him to camp. Adrian says that when he went into his first camp he was rather shy and had no expectations. He says “It was something out of my comfort zone. I still didn’t know myself yet. No one knew me, I could be whoever I wanted, I was free to be myself.” Adrian said that camp was fun, exciting, and “opened my eyes to who I was. I got what I was supposed to get and more”. Adrian returned to camp in 2012, right after graduating high school. He says he was eager to enjoy another positive camp experience, and that returning several years later gave him the unique opportunity to reflect on his own personal growth.

Adrian first staffed camp in 2013. Adrian says “ I wanted to staff because of the positive change that the other staffers had on me, how they reached so many kids in a short amount of time.” Adrian says that staffing camp was like an introduction into the field of education, and that he gained wisdom from interacting with the senior staff. He says, “I got a lot of knowledge from the older staff about traditional ideals that still hold true in today’s world.” Since 2013, Adrian has staffed a total of eight camps in both Northern and Southern California, both as a group leader and a heart. He has also assisted in the development of our virtual programming, and has facilitated two NTLP web series. Adrian is also a member of the NTLP Alumni Committee. Adrian continued to staff because he “wanted to continue to come back for personal growth but also to encourage and be there for the returning participants, and show them commitment.”

Adrian says NTLP has helped him foster friendships with other people and build his own community. Adrian currently works as a paraeducator in the special education department, where he helps students with moderate to severe disabilities have equal access to grade level curriculum. He says that the skills he learned through NTLP translate directly into his line of work, “Being an educator holds the same ideals. I take these ideals to heart, and actively try to spread the mission and values of NTLP at work.” Adrian currently lives in Rio Linda with his husband, Azrael, and has a goal of becoming an educational administrator, saying “NTLP has helped me be confident enough in my leadership skills to want to lead other educators.”

Adrian’s advice to teens today is: “Don’t take the current state of the world to heart. These things are happening to everybody, being a teenager is a hard time, but we’re all getting through it, we’re all in this together, we’ll see each other soon!” At NTLP, we are so thankful to have Adrian as a wonderful alumnus of our program and as an amazing leader in our community!