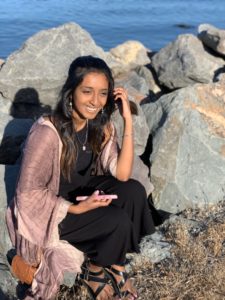 Meet NTLP alumna Ameshah Prabaharan! Ameshah first heard about NTLP while volunteering for a non-profit called Hands4Hope. She attended her first camp in 2012, and had no idea what to expect. She imagined a typical leadership workshop experience, but her first camp turned out to be so much more than that. She says that the “weekend had been so transformational, it opened me up to awareness that I hadn’t known. We [the participants] all went in as strangers, but at the end of the weekend I became so comfortable going up to new people. I made so many close friends. When I went home I knew I wasn’t going home alone, I was going back with mob of support.” Ameshah returned as a participant for several more years, saying that for her camp had become a “yearly refresher of feeling motivated and remembering my power to make positive change.”

Ameshah’s love of being a participant inspired her to join the NTLP volunteer staff team in 2016. She was curious to “see what it was like from the other side” and impact participants who were experiencing camp just as she had. Ameshah has staffed multiple camps, she says she continues to return to staff because she “values the impact that we [NTLP] could create on other youth.” Over the years Ameshah has been an inspiring member of the NTLP staff family, bringing her positive energy and passion to every camp she attends.

When asked how NTLP has impacted her, Ameshah claims that our program has helped her develop personally and professionally. The mock interviews as a participant allowed her to develop strong interviewing skills for the workplace. She says that her experiences both as a participant and as a staff member “helped me form meaningful relationships and start meaningful conversations” and “taught me how to help others feel empowered.” Ameshah’s words of wisdom about leadership are “Part of being a leader is knowing when to step up and when to step back and let others lead.”

Ameshah graduated from the University of San Francisco with a Bachelors of Science in Biology. She currently works at the UCSF cancer center where she helps patients with aggressive metastatic disease get access to investigational chemotherapy. She also has worked with foster animals and is currently fostering a rescue dog named Sahara. Ameshah’s advice for teens right now is: “Really try to put aside the shame and doubt about what others think of you and voice your passions, speak up about what you want to see changed. Even though we’re in a pandemic, there are ways to help other people and get involved.” We at NTLP are so honored to have Ameshah as an alumna of our program and as a leader in our world!