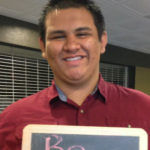 My name is Miguel Sanchez and I have been a participant at NTLP 5 times, (’15 Socal, ’16 Socal, and Norcal, ’17 Socal and Norcal,) and looking forward to participating this upcoming summer. I am a Junior in Bell Gardens High School and was first introduced to NTLP my 8th-grade year by my former English teacher, Ms. Thompson, may she rest in peace, who worked closely with Mark Miller. They both believed that I would greatly benefit from attending NTLP.

After being a participant, I could attest that it has been a remarkable experience and an experience like no other. Coming from a neighborhood with little opportunity and a life of poverty, NTLP gave me a sense of feeling that I knew I had not have gotten anywhere else. I had never traveled, slept in a college dorm, nor had I ever been away from home because I never had the chance to. When I first attended NTLP, I was the only 8 th -grade student there, and I was unsure if I was going to be just like the rest. I was frightened of meeting new people but by the end of camp, I had a sense of belonging and I wished it would have never ended because of all the impactful activities that I had participated in. Every activity, group session, speaker, and workshop, is so valuable because of the things that are being taught and the learning that is occurring. The environment that NTLP creates is so positive because of all the positivity and joy that is shared among all the participants.

Attending NTLP has helped me in various ways. One of them being my Public speaking. I never had enough confidence to be able to speak in front of a crowd, but now I am able to speak to a big audience. Another thing I have learned from NTLP is acceptance. I have learned that every single person in this world matters, and that everyone has their own purpose. Regardless of the situation, people should never be a minority because of the way they look, the way they sound, the way they act, the way they are, people should be accepted and loved for their differences. Before going to NTLP I had an understanding of being a leader, as to lead a group of people or being a leader in a group project. After participating, I have learned that being a leader is more than that, it is about being a role model to other people and working beside them rather than giving orders and being a leader to make a difference in this world.

People always ask me why I keep going back every year or they ask “Isn’t it always the same?” The truth is, every single time I attend NTLP, it is always different. It has never been the same and I have grown as a leader and an individual every time. I believe NTLP is more than the content that is presented at workshops or the motivational speakers, it is about the rest of the participants. There is such diversity in the participants that allow you to learn together and make you eager to learn more about one another. There are such differences in cultures and lifestyles, and different parts of the world that people live in that are represented, and it makes you more open-minded to the world and the change that could be accomplished together.

After NTLP my 8th grade year, I wanted to make a change in the world and I knew I had to start somewhere. I started a Beautification Club in my high school, known as “Club ‘B’ ”, in which we promote beautification in our school and spread the message of picking up after ourselves. I knew I had to make a difference in the amount of trash that was left behind after lunch. Apart from the Beautification Club, which I hold the role of Founder and President, I have been previously elected ASB Sophomore President and more recently elected ASB Junior President. In which I have coordinated activities with local venues like Knotts Berry Farm and the Long Beach Hyatt Hotel to plan the Winter Formal and the Prom. I also am the Founder and President of the Traveling Club, known as “BG Globetrotters”, in which we provide students with fundraisers and traveling opportunities, one of the main trips we have done is New York and Washington D.C. I am also in the Marching Band, holding the position of Sergeant, leading rehearsals and helping the Band Director. Other activities include School Site Council, former President and Chair of the committee, Culinary Arts Program, California Scholarship Federation and College Bound today. It has been a challenge to be able to manage my academics, especially my AP classes, with my extracurriculars, but I have learned to manage my time and always push through it. I always think to myself that all of this would be worth it at the end of the road, and that I could not give up.